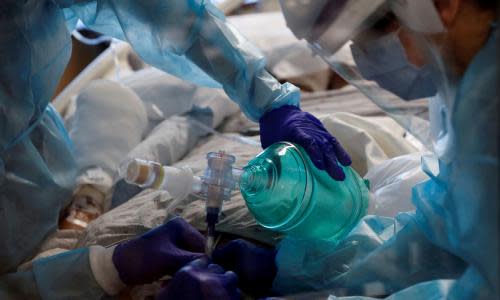 It is difficult to summarise precisely why I feel so angry. For the equal case numbers, hospitalisations are far lower, and people generally are less unhealthy.

Many of our admissions have actually not been vaccinated, nonetheless. Some wish to achieve "natural immunity"; it is uncertain whether they become aware that the only means to do this is to obtain the illness rather. An additional desires "to see some actual data", as if all the details evaluated by the regulative authorities before approval, and also the clear real-world information regarding the decrease in situations, is in some way fabricated. Someone's good friend obtained some side-effects from the injection so she didn't have it; assumption which one of them wound up in medical facility. Most of these people have the modesty to look sheepish, or to explain themselves as "one of those idiots".

Not all, mind: some continue to be defiant as they are wheeled off to intensive care, and also their households reject that Covid itself exists also as their family member is placed on a ventilator.

Exactly how can you also begin to have a discussion with that as a starting point?

On the other hand, the state of mind in the health center is just one of weary resignation. We watch the unraveling case numbers with horror as well as attempt to carry on as usual. It is tough to leave the sensation that, once again, we will be bearing the brunt of our leaders' errors.

For the comparable case numbers, hospitalisations are much reduced, as well as individuals generally are less unwell. Our paediatricians are seeing a fast boost in situations of RSV, a seasonal infection that in serious cases triggers respiratory distress in children. The number of cases we have in hospital is increasing every 14 days or so. Vaccinations have actually clearly compromised the link between hospitalisations and instances, with individuals not getting as sick as they were in the past, but if instances struck 200,000 a day also a tiny proportion of these can bring healthcare facilities to their knees. I appreciate that we will certainly all have to "find out to live with Covid", but undoubtedly we must continue to alleviate danger, as well as opening up in the face of exponentially rising case numbers is idiotic.

It is tough not to view the considerably increasing contour of day-to-day cases with scary. It is evident that we are not also near the top. Existing forecasts appear to be that this will not take place up until later in August, or September. The variety of situations we have in health center is increasing every 14 days or so. At the current rates, that suggests we will need to open up brand-new wards and restart our Cpap device in a couple of weeks. Simply the thought makes me feel worn out.

On the other hand, well over half of our Covid admissions have been immunized. The inoculation plainly functions, yet is not 100% effective in all people.

There are other problems brewing currently. Our paediatricians are seeing a rapid rise in situations of RSV, a seasonal virus that in extreme instances causes respiratory distress in children. Children have actually been socializing a lot less lately and immunity has dropped, so instances are rocketing. Conversations have currently started concerning just how we are mosting likely to share essential equipment-- ventilators, Cpap makers-- between adults requiring it for Covid and kids for RSV.

In this context, it is tough not to really feel undermined by the relaxing of all constraints. Any kind of pretence of "data not dates" or "adhering to the scientific research" is rubbish; why not hang on a bit much longer? I value that we will all have to "discover to deal with Covid", but definitely we must continue to alleviate danger, and also opening up in the face of greatly rising case numbers is idiotic. We have to find out to deal with the danger of getting run over; that doesn't suggest that we cross the road before a verbalized truck. Definitely we can at the very least wait till the contour of new instances is flattish, not steepening, and hospitalisations are not climbing? As well as provide a few hundred thousand more vaccinations while we're waiting?

Essentially, I think that the people I see have actually been adhering to the rules. If individuals are allowed to do something, they will. And also this is what makes me most angry. Individuals will certainly rather sensibly relax their behaviour when rules are kicked back. Urging caution after that is as ridiculous as asking individuals to "remain alert". This is a destructive, contagious, invisible virus that an individual can spread for days prior to they even understand they have it. I have fulfilled 10s, otherwise hundreds, of mindful, careful, honest people who have actually been contaminated despite adhering to the guidelines. All that the current verbal gymnastics can do is to shift the blame away from those in power-- who have accessibility to a wealth of data, the whole photo-- on common individuals who don't have the details to make an educated choice. We need to be given straightforward, clear, risk-free policies to adhere to, nonetheless unpalatable that may be. It is craven and also disingenuous to do or else.

On top of this, various other respiratory viruses are beginning to climb once again in adults. We are beginning to see situations of flu, parainfluenza as well as others that have been almost entirely lacking for months. This creates a huge headache as we attempt to isolate different accomplices from one another. Two accomplices were hard sufficient-- Non-Covid and covid-- today that we have different Covid variants and also clients with other respiratory viruses to separate from one another, we are quickly running out of side areas as well as space in the health center to do so.

We are all still worn down. Degrees of worry amongst team are high; I understand several consultants who have actually gone off deal with tension and lots of others that are obtaining therapy for mental illness. Planning childcare is a nightmare on the changing sands of unforeseen seclusions in youngsters as well as their caregivers, and also this enhances the strain. Surprisingly, I have sensed an enhancing visibility and desire to review psychological wellness that has long been doing not have for physicians and also maybe this is one tiny positive side.

- The writer is an NHS breathing expert that functions across a variety of health centers.

The worry of lengthy Covid and individuals left damaged as well as damaged after serious Covid infections is not reducing and will certainly require to be offered for together with every little thing else. Injections have clearly compromised the link between cases and hospitalisations, with people not obtaining as ill as they were previously, but if situations hit 200,000 a day also a tiny proportion of these can bring health centers to their knees.

On the other hand, however, our jr medical professionals are so near to the edge that minor occasions consistently bring them to splits. Their training has actually been hugely disrupted with this, and also they have high anxiety degrees about the future. The most jr were fast-tracked via to credentials in 2014 as well as have never operated in a medical facility without Covid. They have actually lost out on so much of the sociability, shared experiences, nights out and human get in touch with that developed my coping systems throughout my initial couple of worried months as a physician. No surprise they are struggling. I wish to tell them that this is not regular, that it will not constantly resemble this, however fact attacks: it might well be.